When a diva with no “social filter” roasts patrons at her local coffee house, steam rises as she rekindles her love affair with caffeine.

DeeDee, a diva with no “social filter,” roasts patrons at the local coffee house. Steam rises as we discover DeeDee is having an affair with her therapist. Her father, also DeeDee’s boss, is sleeping with a younger woman, while her ex, the barista, favors a woman in red and the priest toys with temptations. Conversations brew, but none of them meet DeeDee’s high standards as she rekindles her love affair with caffeine.

During a U.S. military operation, designed to bait Iraqi insurgents, local civilians get caught in the crossfire and an American soldier’s life is forever changed by an encounter with an Iraqi woman.

“I feel that all projects, whether they are stories about war or stories about coming of age, are in some way stories about love—not necessarily romantic love, but about the sacrifices made for love, expressed through emotion, action, words and behavior. For me, directing is both a craft and a passion.

As a director and writer, I’m interested in those indefinable acts of compassion; what makes us risk ourselves for another without reason. I’m also interested in what determines the compass of ones morality. I have discovered that it’s not the big things in life that change us as much as the small moments that happen during them. That’s what I’m hoping to communicate in this film.

Truth crosses over borders. I’ve found that wherever I go, there is a hunger and desire that is universal, its part of the human experience, and that life with its triumphs, upsets and dramas is always about overcoming.

I’m drawn to telling stories about the inexplicable part that lives within us that is willing to risk ourselves for a noble cause. I’ll never forget watching the Invasion of Iraq in 2003 and saw on the news that there was no electricity, no water, or supplies for the Iraqi people. I saw the men in the street, I heard their voices, but not one woman’s voice did I hear—and I was listening for one. I kept wondering, what is happening to them… are they just causalities of war? Why don’t they have a voice?

I’ve written several other scripts about war and am always struck by the residual loss of things we don’t hear about—like, during certain skirmishes in the American Civil War when whole forests were burned to the ground, animals starved, ecosystems were destroyed.

The definition of reign is “supremacy” or “rule”… reign happens in war. Some army reigns over another. But there is a second meaning for reign, “period of influence.” In some way, Fadwa will reign inside Delano’s heart and mind; that the reign of our connection to each other is perhaps more powerful than any bullet or even death. 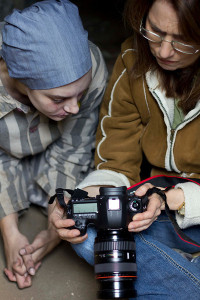